Jean* faced a stark choice. Take over leadership of her father’s animist faith or face deadly consequences.  Jean is a Christian. Her only choice was to leave not just her community, but her country.  She made it to Libya.  There she was safe and that is where she planned to stay – until civil war started and the regime fell.  Then she had to get out.  She couldn’t go home.  The deadly peril of the Mediterranean was her only hope.

Patrick also left his village in fear of his life.  Tribal chiefs were fighting.  In aiming to escape death at home, little did he realise how treacherous the road would be that would take him across deserts and mountains.  He saw his friend die of dehydration by the roadside.  He was not the only one to die on that journey.

Ray shared how people smugglers dumped his group in the middle of the desert.  They had to walk with neither food or water.

Ruth, a Nigerian, had to leave home after her husband ran off with another woman. She could not support her two children and her mother.  She was desperate.  She did not want to go, but she had no choice.  Pregnant and terrified she travelled north by lorry, van, and eventually on foot.  She saw women being raped, pushed into prostitution, beaten and abused during her journey, but praised God that even though she spent four months in a Libyan prison she escaped the worst of the harm.  She lost her baby at seven months. She suffered food poisoning, but with the help of friends she eventually made it onto a boat and was rescued by the Italian coast guard.

These stories are not to shock, but to share, that in desperate circumstances people are forced to make extraordinary choices.  They are not looking for the promised land in Europe, they are looking for security.

The sadness about Global Refugee Sabbath 2017 is that the refugees are still with us.  While the news broadcasts may have moved to other topics, refugees still take dangerous, sometimes fatal, boat trips across the Mediterranean. They are still struggling, trying to make the best out of a desperate situation.  Their story cannot be forgotten.  As was emphasised during Sabbath morning worship livestreamed from a largely refugee church in southern Italy, “Today’s business-person can rapidly become tomorrow’s refugee.”

The church is in Castel Volturno, a deprived and crime ridden town some 35 km (21 miles) northwest of Naples, Italy.  Yet here, Seventh-day Adventist members welcome migrants who have made the dangerous crossing from Libya to Italy and who are now trying to build a future safe from the horrors they have left behind.  Pastor David Malaguarnera and a small group of caring members share their love with about 70 asylum seekers who have settled in the area, many working as casual labourers in the fields and local factories, others finding cleaning jobs or anything that will give them a small income.  The church is open for Italian lessons, and an ADRA Italy co-sponsored agricultural project provides some training and employment.  ADRA Italy even runs a much needed mini-bus service to get the refugees to work in a town so poor that the bus service has been cancelled. The minibus is as poor as the town itself and constantly breaks down.

Refugee stories were told during the live streamed services, a concert and a series of heart-wrenching interviews for World Refugee Sabbath, 17 June 2017.  The live stream also included reports from Adventist Help in Mosul, ADRA Serbia, and from the refugee camps of northern France together with other groups that are helping throughout Europe like Slovakia, Denmark, Germany, Romania, etc. 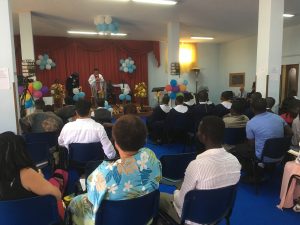 Most of the migrants in Castel Volturno are from sub-Saharan Africa.  Some were already Adventists before they arrived. Others found faith on their journey or, like Jean, were befriended after arriving in Castel Volturno.  Still often exploited as casual labourers and living in squalid accommodation, the church is their security and joy, yet also a base for witness.  They worship, scrimping to find money for Sabbath clothes or, as one lady told us, getting up at 5 am to scour the streets to find clothes discarded by party goers the night before.

They sing, they worship, they pray, and they continuously rejoice that even in difficult circumstances, God is with them. Other Christian Churches in the town are also providing support.

Dave is a big man.  He had moved from a rural farm in Ghana that was not large enough to support his family.  It was less than subsistence level.  He moved to Libya and worked successfully in construction.  Life was better for him and he was sending money home to his family.  He too was hit by the civil war and the consequent breakdown of law and order.  He was targeted and threatened, even by little children.  Teens picked on him wielding planks of wood with nails hammered through them.  But for the intervention of a brave Libyan man, he would be dead.

He no longer felt safe, but he couldn’t go back home.  Fully aware of the danger of the old wooden boats that smugglers cram with human cargo, often at gunpoint and then set adrift at sea, he still saw this as his only chance.  It took him two attempts.  The first time he was at sea for 5 days with no food or water.  Eventually the boat, with 200 passengers, drifted back to the Libyan shore and broke up on the beach.  During that time his fellow passengers called him ‘padre’ as he would pray with them and encourage them with hope.

Today he works on a part-ADRA Italy sponsored agricultural project, Lavoriamo terre migranti, learning both farming skills and people management. He has hope and is a leader in the church, often supporting, praying with and counselling new arrivals.  His family are still in Ghana and he works hard to send money home to support them.

Camera-men, journalists and the entire Global Refugee day volunteer team from ADRA Italia, the Trans-European and Inter-European Divisions, Hope Channel Italy, and Radio Voce della Speranza – Rome, often found themselves near tears as they listened to the stories, but also felt the warmth and hope in the hearts of the members.

One such member, originally from Fijtransferred from the Naples church to Castel Volturno to help with translation.  Her heart opened and she fell in love with the refugees.  “We are all one family,” she said, “in this church there is no skin colour or prejudice, we are family.”  That was a thought Pastor David Malaguarnera emphasised in his sermon, noting Paul’s words that in Jesus Christ there is neither Jew nor Greek, bond for free.”  For those who had found themselves in forced labour, or worse, during their journey, these words had real meaning.

For Corrado Cozzi, Inter-European Division Communication director, who took a primary lead in organising Global Refugee Day 2017, his purpose was clear, “We can create this contact today with the rest of the world and say ‘we are with you, we know your story, we pray that the Lord could recover your deep wounds made by the challenges you had had to escape from the tragedy of your life”.

Cozzi, a newly blessed grandfather, found himself spontaneously cuddling babies, expressing the hope that these children now have a future.

Brimming with enthusiasm, Dag Kristian Pontvik, ADRA Italy Country director, is seeking ways to do more for the migrants in this area and other parts of Italy.  In addition to the great need to replace the local minibus, he wants to expand the project and is equally encouraging other churches in Italy to open their doors and hearts to the migrant community.  This includes theology students at Villa Aurora, the Adventist college near Florence, who are giving football training and companionship to a group of under-sixteen migrant boys housed in a nearby hostel.  But his plea goes far beyond Italy and the once a year event of a refugee day.  His plea goes to the heart of Christianity and Total Member Involvement – noting both the compassion of Jesus for the dispossessed, and the way that people in transition are often more open to the Gospel, especially when that gospel is expressed in practical ways.

There will be another refugee day next year, but, he pleads, don’t wait until then to get involved, see how you can make a difference now.

ADRA Italy is seeking to raise 20,000 Euros to replace the Castel Volturno minibus and qualify refugees to drive it.
ADRA International would welcome your donations for Refugee projects.
Adventist Help, an ASI charity, is providing medical services at refugee camps in Greece and Iran.  They need both volunteers and financial support. See their Facebook Page.